This page explains how to contribute to an ongoing OpenSILEX development and what good practices are recommended within the community.

Summary of this chapter’s recommendations :

Install the version control system Git from https://git-scm.com/ or from a terminal, e.g. on a Linux terminal :

Super-user priviledge may be required. If so, execute sudo apt-get install git.

On Linux, you can check your version of Git and display its documentation from the terminal :

These commands can also be used on Windows operating systems through Git Bash Here. When installing Git on Windows, make sure you include Git Bash Here in Windows Explorer: 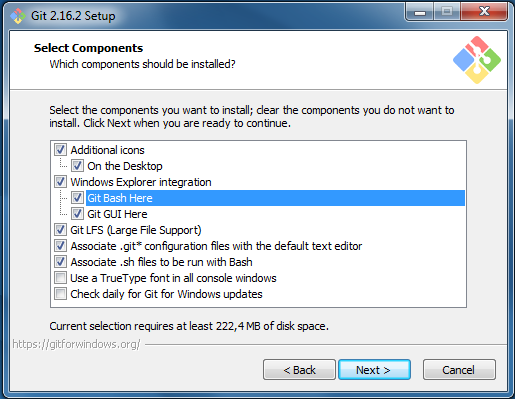 On Windows, open Git from any Explorer window with a right-click > Git Bash Here (instead of Git GUI Here) in order to be able to use the commands presented in this documentation. At the moment, the present documentation provides no information on how to use Git GUI. 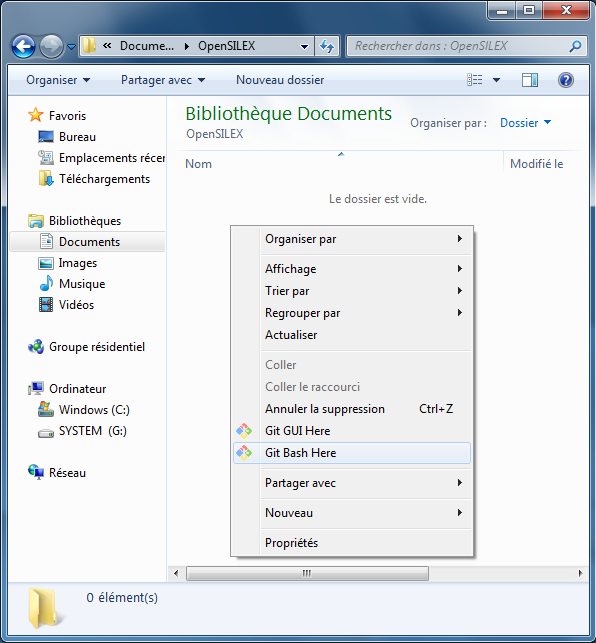 If you are new to Git, you can check out this simple Git guide and its associated Git cheat sheet, or this other Git cheat sheet. The official GitHub guide is also worth a read.

The local configuration of Git has to be done only once. From a terminal (Linux terminal, Mac terminal, or Git Bash Here on Windows), you can indicate your name and your email address with the command lines (without the < and >) :

You can verify your configuration using :

The complete documentation of the Git config command is available on Git official website.

Create a GitHub profile on https://github.com/.

If you are an INRA agent, you have to specify it on your profile, using the @INRA tag. You can find more INRA recommendations regarding the use of GitHub on this document from 2017.

You can link your GitHub account to your local Git using a SSH key.

Follow the steps in the GitHub help webpage Generating a new SSH key for the local generation of a SSH key.

This procedure generates a public key in the text file /home/<you>/.ssh/id_rsa.pub. Copy it.

Sign in GitHub and go to GitHub Settings > SSH and GPG keys. Click on the New SSH key button. 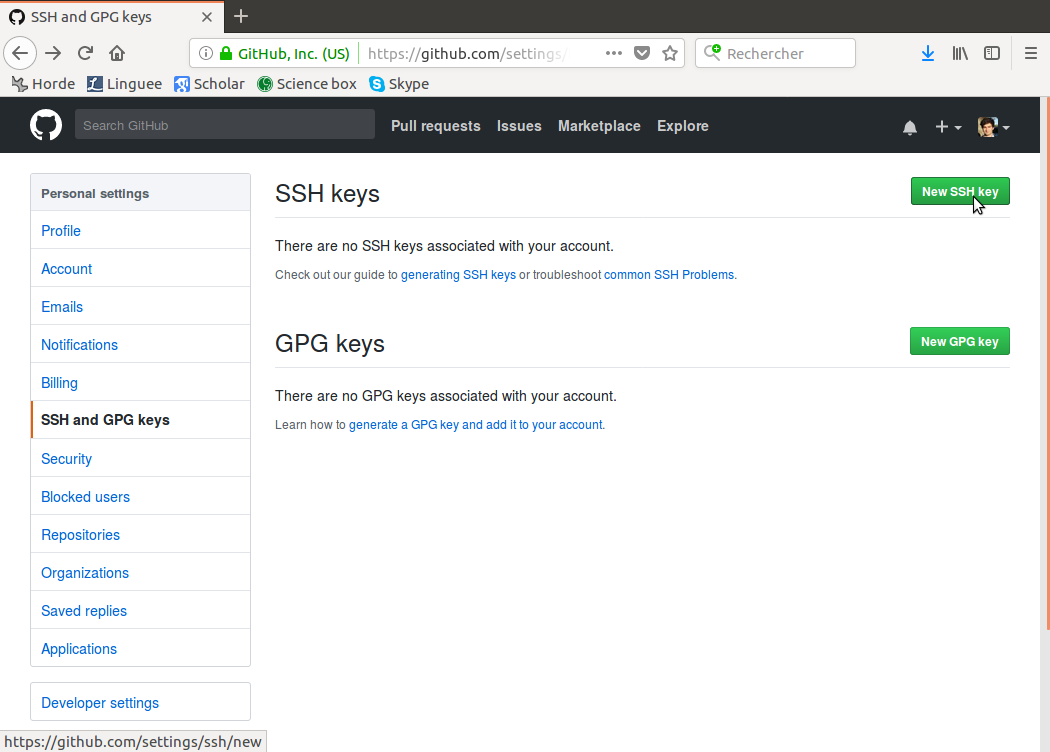 Paste the copied public key in the empty Key field. You can then check if the connection is open from a Linux terminal :

The message You've successfully authenticated, but GitHub does not provide shell access. should appear: it works !

Official help pages are listed in the Connecting to GitHub with SSH webpage.

OpenSILEX development projects are organized in separate repositories. All OpenSILEX repositories are listed in the OpenSILEX GitHub webpage.

When joining an ongoing OpenSILEX development project, there are two initial steps that need to be executed :

As the first GitHub guide states, repositories are used to organize single projects. They can contain folders and files, images, videos, spreadsheets and data sets, while branches are different versions of a repository. By default, a repository has only one branch named master which is considered to be the definitive branch.

In order to fix a bug or to add a new developments, I can create additionnal branches to my repository. Once the changes made to these new branches have been completed and checked, the new branches’ code is merged into the master branch, and the new branches are deleted. This procedure is described in GitHub Flow.

The instructions for creating a branch are available on the official GitHub tutorial : https://help.github.com/articles/fork-a-repo/

First, go with a browser to the URL of the repository you are interested in, e.g. https://github.com/OpenSILEX/docs-community-dev. From this GitHub webpage, create your own branch of the development project by forking the repository (top-right Fork button) :

Forking the master branch should lead you to your own branch, accessible through GitHub. In our example, the branch that has been created by forking OpenSILEX/docs-community-dev is accessed to through the a new URL of the form https://github.com/[your_username]/docs-community-dev. 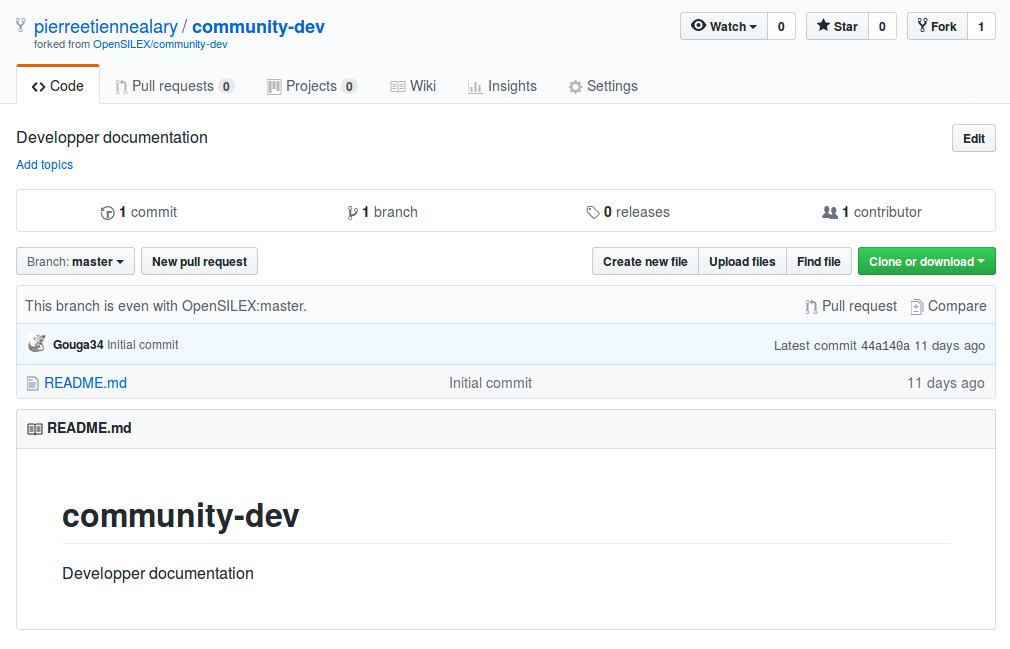 Make sure that you fork the repository owned by OpenSILEX, and not someone else’s repository.

Then, you want to make a local copy of your branch on your computer. From your repository’s GitHub page, copy the URL of the branch you want to clone by clicking on the green Clone or download button, on the right of your own repository webpage. 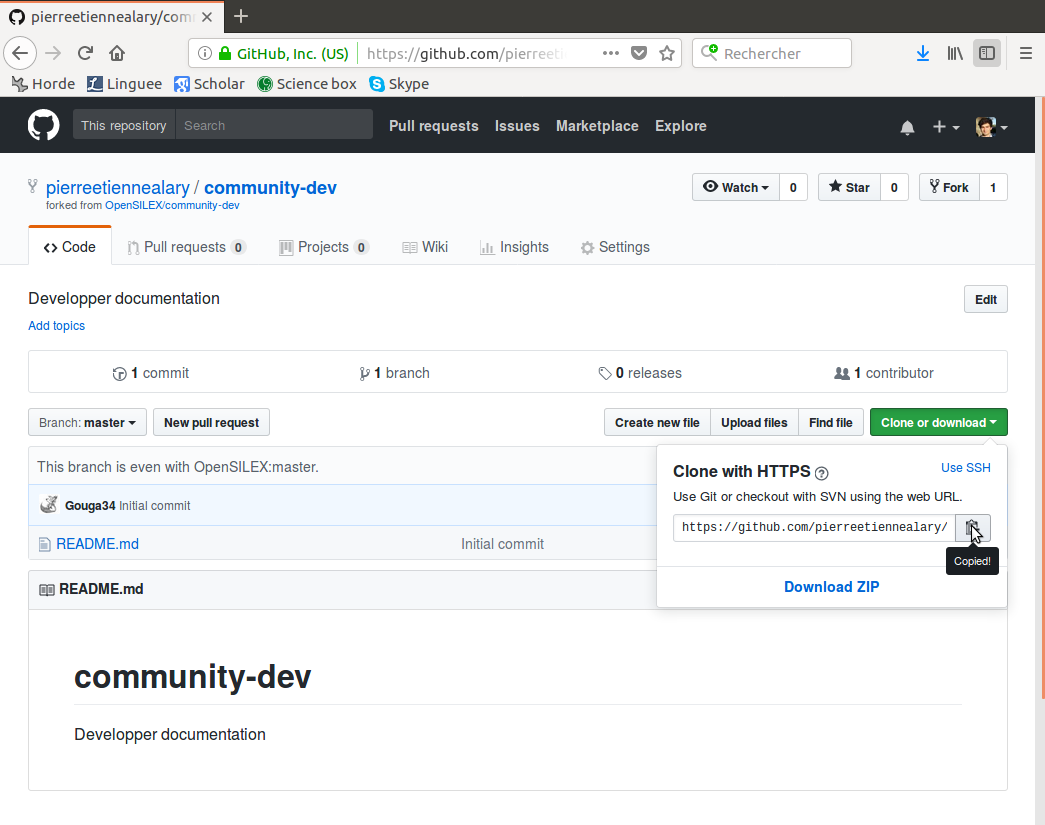 Another option is to download a compressed version of the repository using the Download ZIP button below, but the OpenSILEX community strongly advises otherwise.

Choose a local directory on your computer where you want the Git repository to be cloned. There, you can open a terminal (linux) or Git Bash Here (Windows) and use the git clone command. From an UNIX terminal and using the SSH protocol, the command would be git clone git@github.com:[your_username]/[repository_name].git. Using the HTTPS protocol, the command would be git clone https://github.com/[your_username]/[repository_name].git. However, using SSH is preferable to HTTPS (in order not to have to provide your username every time you want to update your branch).

The command git clone can be used either with SSH or HTTPS.

Choose on your computer the directory where you want to create a local copy of the cloned repository. From this directory, open a terminal (linux) or Git Bash Here (Windows), and then type git clone followed by the SSH URL you just copied from GitHub.

The alternative (less recommended) is using git clone and then HTTPS :

The git remote -v command gets you the list of the remote repositories.

You can add upstream repositories associated to the list of the remotes using git remote add <name remote> <path remote>. If you choose to name “upstream” (recommended) the main remote repository owned by OpenSILEX, the command line would be :

By default, “origin” is the name of the repository you created by forking the OpenSILEX repository (the “upstream” repository).

You can change the branch you are working on using git checkout <name of the branch>, e.g. git checkout master to see if the master branch is in advance compared to yours.

The command git branch used without being followed of a character string displays the list of branches of a given repository and specifies on which branch you are (branch whose name is preceded by a *). 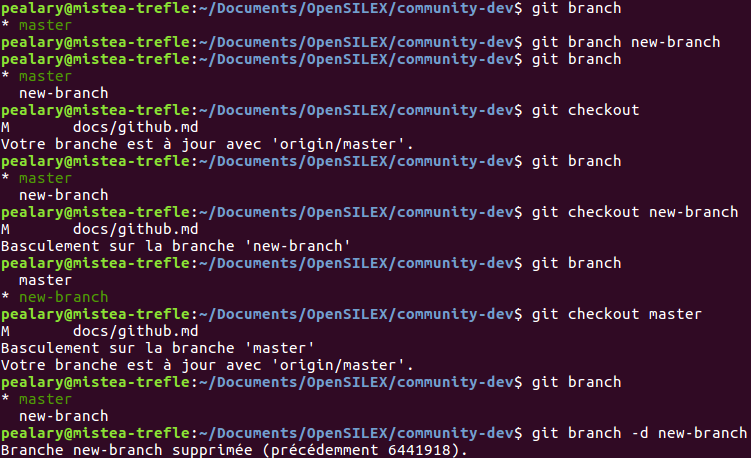 When deleting a branch, use git branch -d <branch_name> followed by git push origin :<branch_name> (do not forget the : in front of the name of the branch).

Become up-to-date with a pull

This works only if you have previously named “upstream” the OpenSILEX repository that you have forked (instructions given in the previous Manage remotes section).

When you use the git pull command, make sure that you haven’t previously made any new modifications to you branch, otherwise this would be generating conflicts.

After having made modifications to your local repository, you can check which files have been modified using the command git status.

Note that you can use git status -s for a shorter answer (less verbose). If a file appears in red, its means that it has been modified but not yet “added” to the list of files whose changes are to be commited to your branch.

You can visualise line per line the changes you made to a file with git diff <filename>. For example, you would use git diff github.md in order to see the changes made to the file github.md.

An important step is the selection of the created or changed files whose changes you would like to record to the repository (i.e. commit). This is achieved by adding changes to the index through the command git add followed by the name of the file you created or change (e.g. this markdown document github.md).

Re-using the git status command, the created or changed files added to the index no longer appear in red, but in green : the changes are ready to be committed (i.e. saved in the shared repository).

Note that the command is also git add when you remove a file locally and then want it to be removed from the repository.

The git commit commands must be followed by a short message in brackets (itself preceded by -m) where is specified as concisely as possible the content of the changes that have been made :

Once the changes have been committed, the concerned files are still displayed in green.

Finally, the command git log is used to display all the previous commit that have been made on a given repository. In order to exit the git log, use the q (quit) to exit the log.

The changes made locally needs to be pushed to the origin remote (in my case : pierreetiennealary/community-dev). This is achieved through a git push folllowed by the name of the target repository (e.g. “origin”) and then of the target branch (e.g. “master”).

A good practice would be to push to the master branch local changes made during the day every evening before leaving the workplace.

Request your changes to be pulled 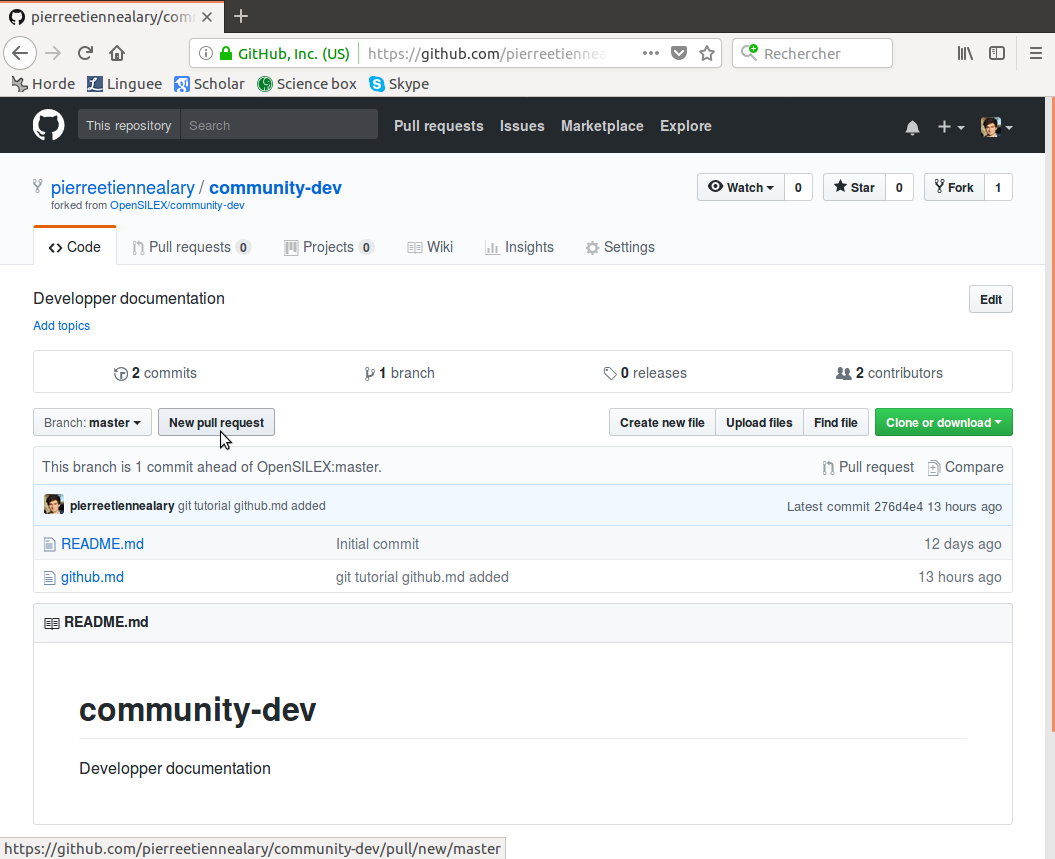 You can then visualise all the changes you made through the Comparing changes window. In order to go on with the pull request process, click on the green Create pull request button. 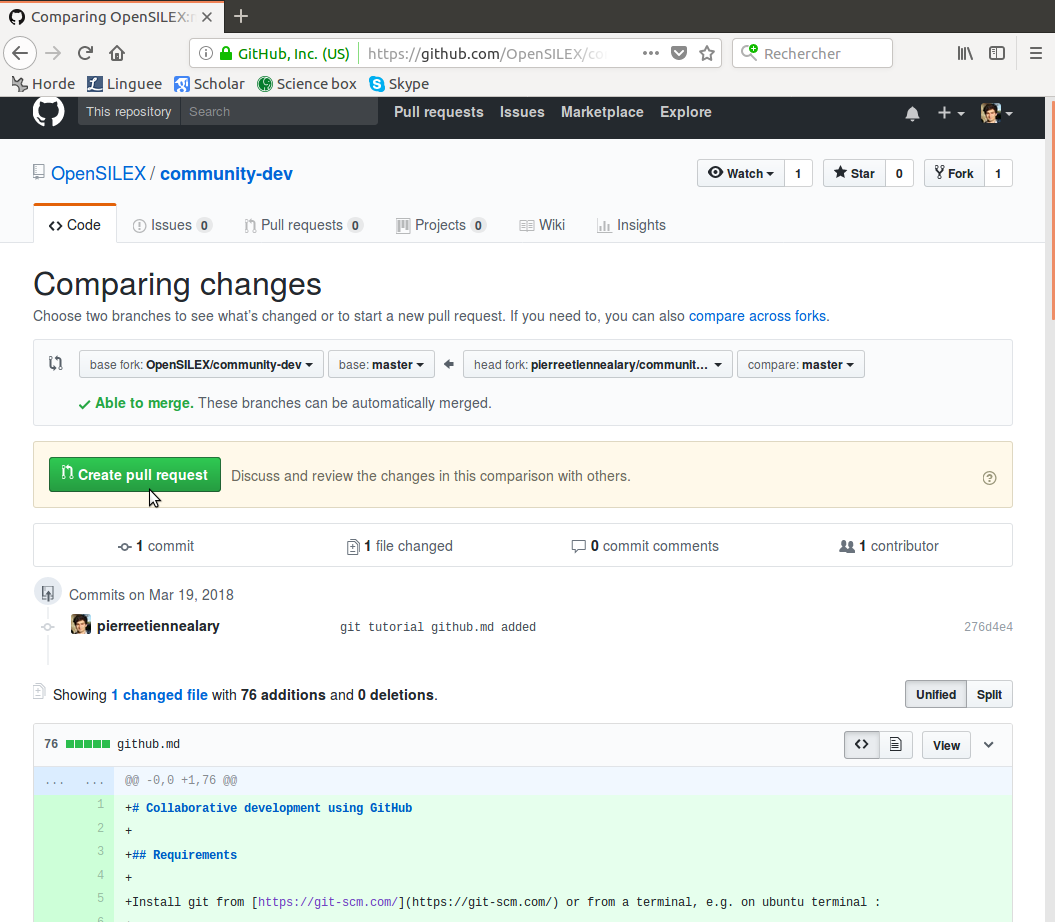 From the Open a pull request window, you can name your pull request and add comments if you consider the messages associated with the commits not to be sufficient. 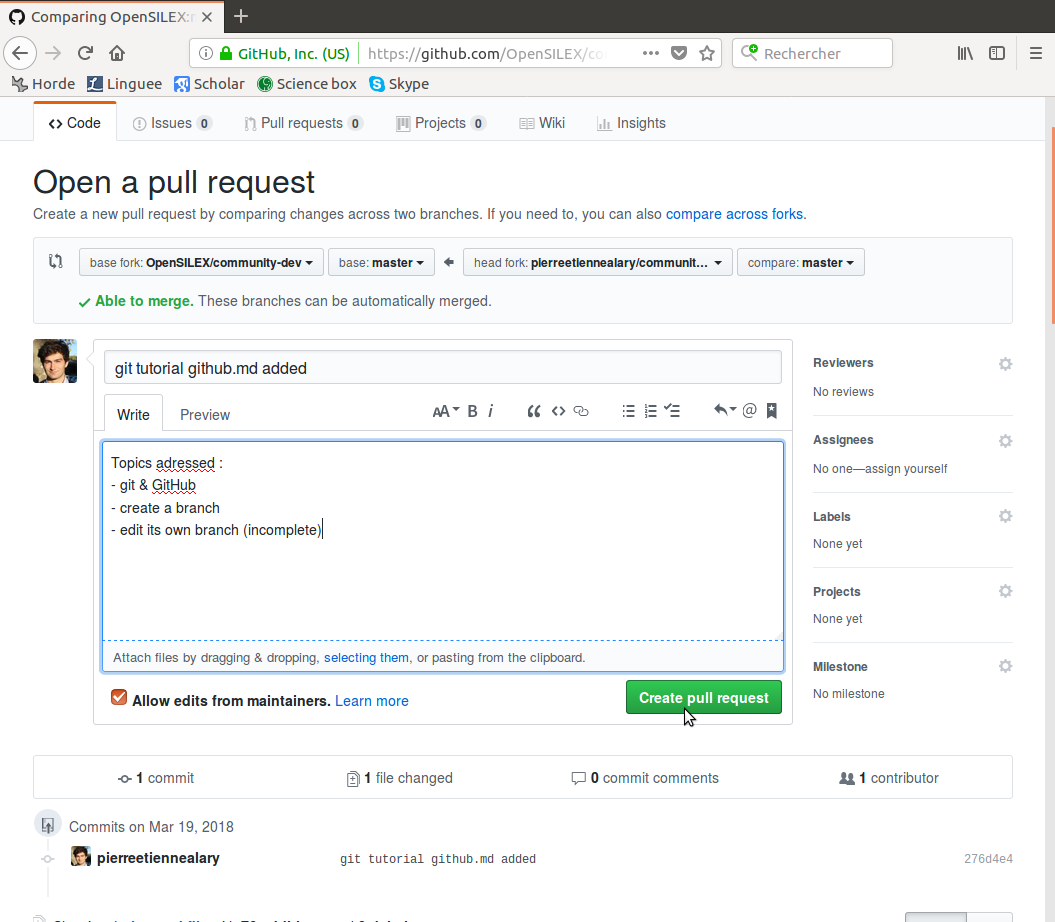 The last step consists in merging the pull request. If you do not have the authorization to change the OpenSILEX repository, you have to wait for an OpenSILEX maintainer to merge your pull request. 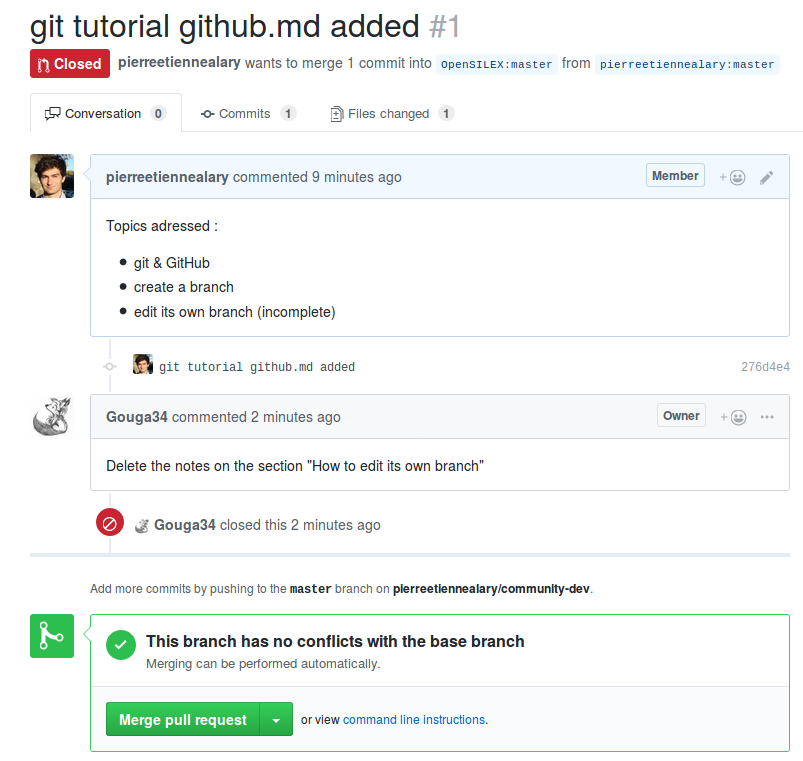 See the Code of Conduct within Insight > Community of each OpenSILEX repository for specific indications on how to contribute to each development project.

Concerning the use of git and GitHub, here are the main OpenSILEX recommendations :